Proteins are involved in most cellular processes, fulfilling essential functions. The functions of single proteins have been analysed for decades, but the interaction networks hidden behind are still not clear. Proteomics allows nowadays the analysis of several thousand proteins and their co-regulation. This has been possible by the recent developments in mass spectrometry, which improved the sensitivity and fidelity of the analysis.

We are using mass spectrometry based proteomics to analyse cellular signalling on a global scale. The research is focused on signalling events, which are dependent on the post-translational modifications and the proteomics of degradation systems, as well as the application to clinical questions.

In recent years, the development in quantitative proteomics has allowed the exact comparison of different proteomes. This in turn allowed to determine specific changes which are related to cellular regulation under different conditions. A method called stable isotope labelling in cell culture (SILAC) uses amino acids labelled with heavy isotopes. The use of these isotopes introduces a constant mass shift, which is measurable in high resolution mass spectrometers (Figure 1). This allows the identification and relative quantification of thousands of proteins in a single experiment.

Isotopically labelled amino acid, can not only be used for the comparison of cell populations on a global scale, but also for mapping changes in the synthesis rate. For this, cells are shifted from normal media to isotope labelled media and the changes in the incorporation of the heavy amino acids are monitored over time - dynamic SILAC (Figure 1). 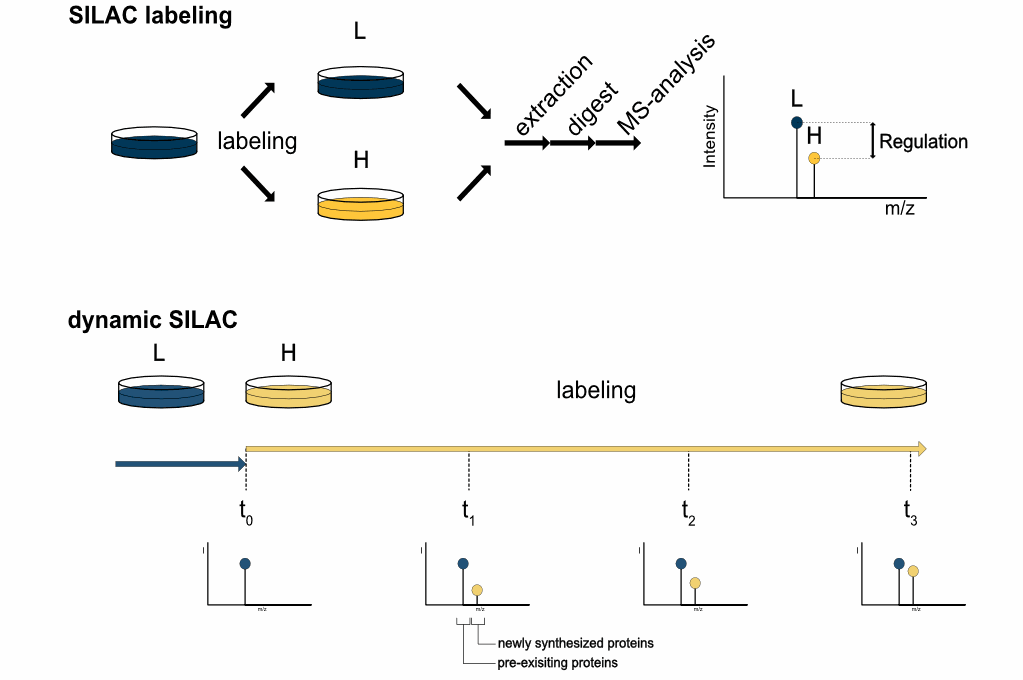 During the SILAC labeling process the naturally occurring, light amino acids are replaced by a chemically synthesized heavy amino acid. The amino acids are metabolically incorporated into proteins until all proteins are uniformly labelled. Proteins can then be extracted from both cell populations simultaneously, digested to peptides and analysed on a high-resolution mass spectrometer. The label leads to a doublet signal, which can be used for the exact measurement of the regulation for a specific protein. The dynamic SILAC technique focusses on the detection of newly synthesized proteins. By introducing the heavy SILAC amino acid a certain time all protein which are synthesized after the switch will be labelled heavy. The increasing ration between the light and the heavy signal can be used to determine dynamic changes in the synthesis rate of proteins.

Contrary to the quantification of cellular changes targeted methods take advantage of the prior knowledge about the targets. For many biological questions, it is very clear which proteins have to be monitored to answer the scientific question. Targeted proteomics allows the detection of specific key peptides for a given protein with high reproducibility and sensitivity. It also allows the sensitive detection of target proteins in complex mixtures, like biofluids. In order to achieve this high sensitivity preselected peptides and specific fragments of these peptides are monitored, allowing the consistent quantification in many samples (Figure 2). Usually the run time of such an experiment is also shorter allowing the consistent analysis of large cohorts.

Targeted measurements allow the exact and specific measurement of a selected peptide in a complex matrix. Here the mass spectrometer is instructed to isolate a specific mass in the MS1 and then specific fragments in the MS2 are monitored over time. This can be used for the specific, reliable quantification of selected proteins.

Cellular homeostasis is essential for the survival of cells and is at the basis of cellular communities as found in tissues and organisms. The tight control of synthesis and destruction of proteins is essential. The synthesis of new proteins is controlled by transcription and translation and is based on the genetic makeup or cellular signals influencing transcription and translation rates. Protein destruction can occur in either as bulk or specific degradation. The ubiquitin-proteasome system is the main system for specific protein destruction. Proteins destined for destruction are marked by a special small protein, ubiquitin. Like other post-translational modifications - e.g. phosphorylation - the ubiquitin can be covalently linked to target proteins utilizing an enzymatic cascade of E1/E2/E3 enzymes. The process can be reversed by deubiquitinating enzymes, which are capable of cleaving the covalent bond between ubiquitin and its target proteins (Figure 3).

Ubiquitin is covalently linked to the ε-amino group of the lysine side chain in the target protein. Since ubiquitin itself has 7 lysines it can be linked to itself forming a chain of ubiquitins. Each of these 7 lysine linkages results in a specific shape of the ubiquitin chain and thus can code for 8 different signals (the 7 internal lysine and the N-terminus). These signals can lead to the rapid destruction, its stabilization or the specific localization of the target protein.

Besides phosphorylation and ubiquitination a growing number of the post-translational modifications are found to have significant biological impact. They are often involved in cellular regulation. How can a post-translational modification change signalling? One possibility is changing the interactome of a given protein, by either recruiting proteins and complexes to the modified protein, or by destroying the interaction, which lead to the dissociation of the interacting complex.

We are interested in the global changes of the interactome of proteins by post-translational modifications and are constantly working on different methods to explore this.

Cancer is still one of the leading causes of death in the industrialized society. The success of treatment is strongly based on early diagnosis of the tumour, so treatment can be applied early. The development of biomarkers, which can be used on biofluids, which are available in routine procedures is a key requirement for such a development. In the clinical proteomics group, we are using targeted mass spectrometry to define marker panels, which are capable to detect tumor signatures and thus allow early diagnosis. 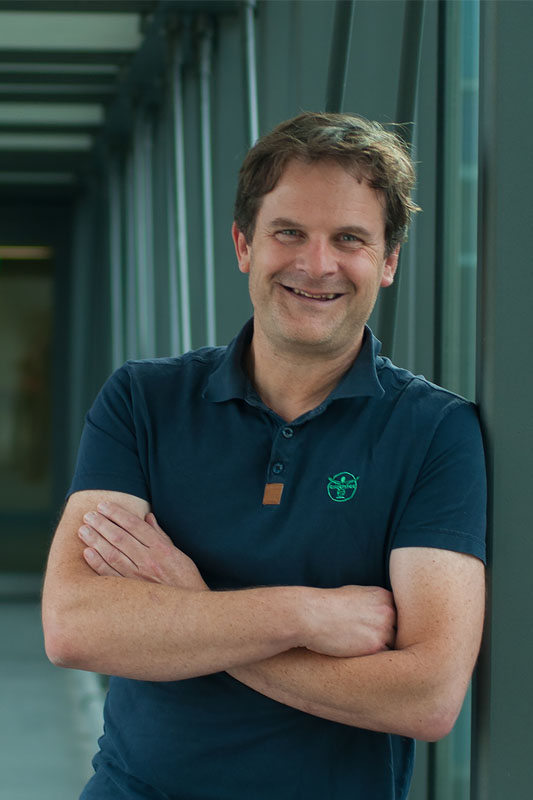