The institute publishes its annual report

The institute publishes its annual report

LIH and IBBL - Integrated BioBank of Luxembourg publish their 2018 activity report, an opportunity to look back on an eventful and fruitful scientific year.

A year of outstanding scientific achievements

'Although I was already impressed by the scientific quality and originality of the research when I arrived at LIH, it is now official: LIH is listed in the Times Higher Education ranking of the world's leading non-university research institutions',

LIH ranks 7th in Europe and 15th worldwide - a clear recognition of the scientific excellence of the institute, whose research projects, ‘primarily serve the well-being of patients’, as underlines Dr Frank Glod, Chief of Scientific Operations. An external evaluation of LIH's research activities and strategy at the request of the Ministry of Higher Education and Research confirmed this excellence.

2018 was therefore a successful year for the institute, which is constantly evolving and facing up to the future challenges of biomedical research, for instance by taking advantage of the opportunities offered by digital health - a topic that will be further explored in 2019!

Review of the discoveries of 2018

Parallel to the strategic development of the institute, LIH’s researchers have made numerous discoveries in 2018 and published promising scientific results relevant for healthcare and population health.

In the field of breast cancer research, for example, the identification of a resistance mechanism occurring in tumour cells opens up avenues for the development of new treatment strategies.

Important studies have been conducted in the context of food allergies. One of these studies validated a new test for the detection of the alpha-gal syndrome, an allergy to red meat.

In a study on the frailty of elderly people, frailty scores were examined for their predictive value for disease development and mortality. The results demonstrate a link between frailty, cardiovascular disease and mortality and will help doctors choose the most appropriate instrument to determine the frailty of their patients so that consequences can be better prevented.

To advance translational research, LIH and the Laboratoire national de santé (LNS) have founded LuxGen, the first sequencing centre in Luxembourg. The new technology platform is equipped with state-of-the-art equipment and gives researchers access to Next Generation Sequencing technology. The term describes a group of powerful sequencing techniques that allow large amounts of genetic information to be read simultaneously and quickly at a moderate cost. Among other things, the technology can be used to detect genetic abnormalities that cause disease.

A new research team has been set up at the Department of Oncology to strengthen research efforts in the fight against cancer. Dr Johannes Meiser, a promising researcher, joined LIH after receiving 1.5 million euros from the ATTRACT funding instrument of the Luxembourg National Research Fund (FNR), enabling him to develop a new field of research in cancer metabolism. The metabolism of cancer cells differs from that of healthy cells. Understanding the unique properties of this metabolism will help identify cellular mechanisms or components that could serve as drug targets paving the way for new treatments.

LIH has organised numerous events to gather the scientific community and promote its activities to the broad public.

Importantly, IBBL celebrated its 10th anniversary. The biobank was founded in 2008 as part of the national action plan "Health Sciences and Technologies" and has been contributing to Luxembourg's positioning as an internationally renowned centre of excellence for biomedical research and personalised medicine for ten years. On 9th November 2018, partners, collaborators and colleagues from the most important medical institutions and research institutes in Luxembourg met to celebrate this 10th anniversary of the founding of the biobank. With this event, IBBL expressed its gratitude to the actors who have made its success possible.

In February 2018, the LIH Science Quest took place, a three-day event to promote science and research to the public. In a team game, conceived after the model of Escape Games, more than 300 people could slip into the shoes of scientists. This allowed them to get insight into the world of research and to discover the projects of the institute. The innovative concept of this event was selected for the Young Communicator Award at the European Communication Summit and got the second place. 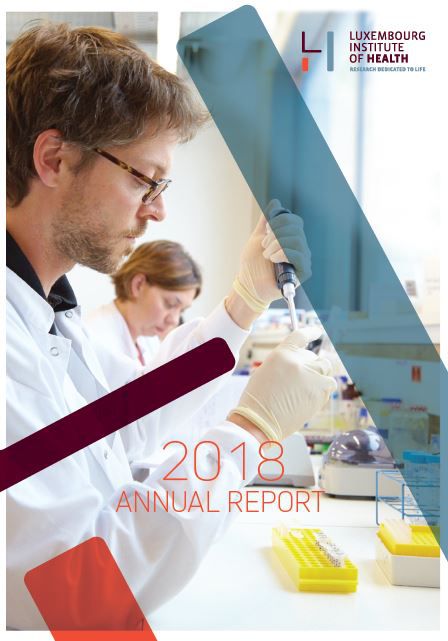 Discovery of a link between diabetes and frailty in elderly people