On Monday, September 14th, the Minister of Higher Education and Research, Claude Meisch, the Minister of Health, Paulette Lenert, and the Research Luxembourg (RL) COVID-19 Task Force held a press conference in Dudelange to officially conclude the first phase of the large-scale testing, led by the Luxembourg Institute of Health together with the Research Luxembourg community. The operations of the second phase have been handed over to the Health Directorate of the Ministry of Health and will start mid-September.

As part of the exit strategy, Luxembourg has implemented an extensive and unique nation-wide testing campaign, inviting its residents and cross-border workers to voluntarily get tested for COVID19. The aim of this large-scale testing (LST) initiative was to limit the spread of the novel SARS-CoV-2 virus by identifying positive cases early, including among asymptomatic persons, thereby breaking infection chains. At the same time, LST aims to contribute to the close monitoring of the spread of the virus among our population.

The first phase of the LST, coordinated by the Luxembourg Institute of Health (LIH), ran from 27 May until 27 July and relied on 16 ‘drive-through’ and 1 ‘walk-through’ test stations, with a maximum theoretical capacity of 20,000 tests per day. The population was divided into three main categories. The first category was composed of people exposed to a high infectious risk by their professional activity (such as healthcare professionals) whereas the second category consisted of those having resumed their professional activity or about to get back to work. The third category encompassed representative samples of the general population. The recurring testing of the contingents and the rigorous contact tracing not only aims at avoiding new infection chains but also at providing decision makers with evidence-based data.

An extension period prior to the beginning of Phase II was set up during the summer period until 15 September with the aim of monitoring the evolution of the epidemic also during the summer months with a particular accent on people coming back from holidays, those professions specifically linked to the holiday period (Horesca, seasonal workers) and the school start.

In total, 1,520,445 invitations to LST were sent, and 560,082 tests were conducted covering 307,751 Luxembourg residents, reflecting an overall participation rate of almost 50 % of the resident population.

The second phase of the LST will be coordinated by the Health Directorate of the Ministry of Health and is set to run between 16 September 2020 and March 2021, with a capacity of 53,000 tests per week. Building on the experience gained during the first phase, which showed a relatively low prevalence rate, the second phase of the strategy will narrow the focus of the tests and target specifically the population most exposed to the virus, while at the same time allowing for capacities to be adjusted in a timely manner to the evolution of the situation and over a longer period of time than the first phase. This nuanced approach will foster a more precise meshing of the population and a more efficient reactiveness. More detailed information as to this new phase of the LST will be provided by Health Minister Paulette Lenert during a press conference on 24 September.

The handover press conference, which took place at the premises of the Integrated Biobank of Luxembourg (IBBL) in Dudelange in the presence of the Minister of Higher Education and Research, Claude Meisch and the Minister of Health Paulette Lenert, brought together all relevant stakeholders including the CEOs of Research Luxembourg-member institutions, the spokespersons of the RL Task Force, members of the LST scientific advisory board and representatives of Laboratoires Réunis.

"As the work of Research Luxembourg on the large-scale testing campaign draws to a close, we would like to sincerely thank all the partners who contributed to the success of this extraordinary effort, particularly Laboratoires Réunis and the staff of Research Luxembourg member institutes”, states Prof Ulf Nehrbass, CEO of LIH and spokesman of the RL COVID-19 Task Force.

“This unparalleled initiative has been widely recognised at the international level, further strengthening the country’s reputation as a leader in public health and biomedical research”, adds Prof Paul Wilmes from the University of Luxembourg’s Luxembourg Centre of Systems Biomedicine (LCSB), deputy spokesman of the Task Force.

“The strength of our response to the pandemic lies in the tight connection between public health initiatives such as the large-scale testing and the outstanding research efforts of Luxembourg’s research institutions. This synergy plays a fundamental role in providing tangible solutions to societal issues”, concludes Claude Meisch, Minister for Higher Education and Research.

“The large scale testing project has confirmed the high level of resilience, adaptability and reactiveness of our country as we face an unprecedented crisis of international dimension. It will reinforce our preparedness all along the evolution of the epidemic. The second phase will consolidate our position as a leader in large-scale testing and will be part of the government’s efforts to fight the virus, ideally until the crisis ends, while allowing for a particular attention to be put on specific target groups” states Paulette Lenert, Minister of Health. 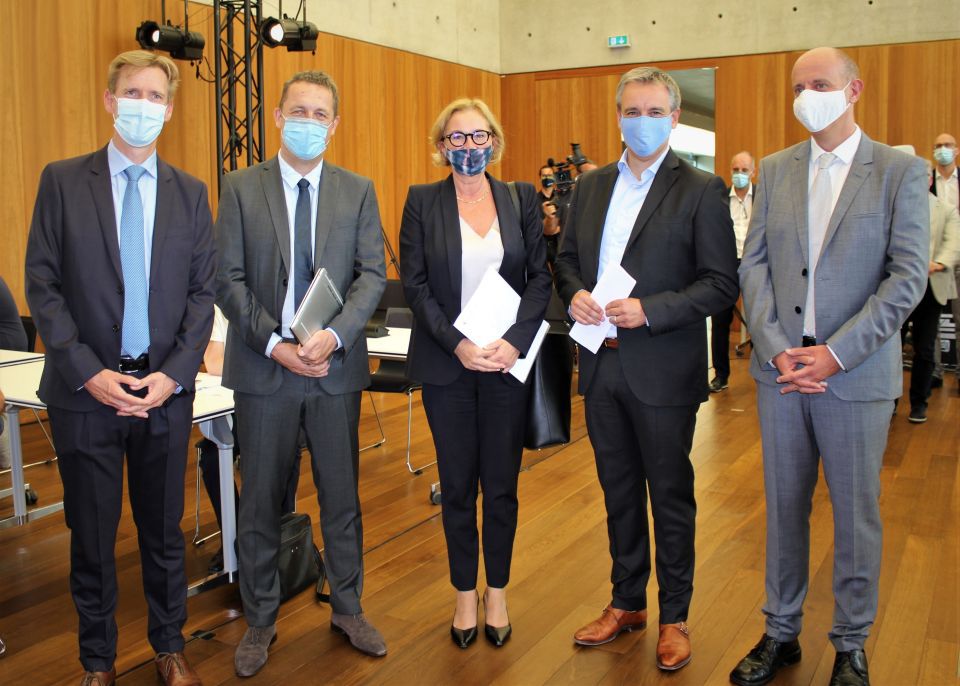