Meeting a Nobel laureate is special. Seeing dozens of them at once is stunning …and only possible at the yearly Nobel Laureate Meeting in Lindau, Germany. LIH PhD candidate Davide Franchina had the opportunity from 24th to 29th June to be among the 600 young researchers from all over the world who had been selected to attend the 68th edition of the meeting dedicated this year to the field of physiology and medicine.

The Lindau Nobel Laureate Meetings are organised yearly since 1951 and are designed as a forum for exchange, networking and inspiration. The targeted public are outstanding Master students, PhD candidates and postdoctoral researchers below the age of 35. To attend, they successfully passed a multi-stage international selection process. Davide, who holds a PhD grant of the Luxembourg National Research Fund (FNR) from the AFR Bilateral funding scheme with RIKEN (Japan) and is a member of the PRIDE Doctoral Training Unit NextImmune, was one of the two Luxembourg-based candidates pre-selected by the FNR. He was also supported with a travel grant from the FNR to attend this exceptional event!

Davide is currently in the second year of his PhD and works in LIH’s Department of Infection and Immunity in the Experimental and Molecular Immunology Research Group led by FNR ATTRACT fellow Prof Dirk Brenner. He is investigating how cellular stress interferes with the immune response, focusing in particular on the metabolic changes happening in B lymphocytes.

The promising young researcher spoke about the experiences he made in Lindau in an interview with LIH’s Communication Unit:

You had the opportunity to be with 39 Nobel Laureates during six days. How are those acclaimed scientists like?

The Laureates are very open-minded people, not big-headed at all as one could maybe think. To my surprise it was relatively easy to approach them to talk to them. They also approached us the young people spontaneously to start informal conversations. We had numerous opportunities to chat with them, during the dinner time for example. It seems to me that they all particularly like telling funny anecdotes from their lab.

Could you tell us a bit about the meeting programme? What were the highlights for you?

First of all, I was impressed by the nice location, as Lindau is just next to the Constance Lake. We were hosted in a former “castle”, and the meeting took place in the Inselhalle, a brand-new modern conference building. On the first day at the opening ceremony, it was a captivating moment when all the invited Nobel Laureates were standing together on stage during the welcoming speech. The programme of the coming days was composed of high interesting lectures, panel discussions, master classes and poster sessions.

I enjoyed the master classes a lot. The format allows for an intense exchange between us young scientists and the Laureates. In each master class, three junior researchers had to give a short talk on their research and two Laureates chaired and fostered an exchange on the presented topics.

The panel discussion that stroke me most was about “Science in a Post-Factual World”. It debated about the tendency of today’s society to doubt about solid scientific evidence in certain fields, for example about climate change. Some people even completely reject science. Related to this, there was a talk about the importance of accurate science communication to the public, with the advice not to communicate every research result as a sensational discovery in order to remain credible. This is especially important when communicating on cancer research. Countless articles have already promised a cure for cancer, so that people are unable to distinguish between promising preliminary results and true breakthroughs.

What was your most outstanding encounter?

That with Prof Rolf Zinkernagel. He received the Nobel Prize in 1996 for his discovery of how immune cells can sense virus-infected cells. He demonstrated that microbial antigens can only be sensed by our immune system when they are associated with the major histocompatibility complex (MHC) and displayed on the surface of infected cells. I have already seen Prof Zinkernagel at another meeting and know well about his research, so it was easier for me to go and talk to him. He has some intriguing ideas, so he is an interesting person to discuss with. In our research group we also use a model for viral infection that was developed in his lab and he could give me some advice for my experiments.

What did this meeting bring to you personally?

The conference had a high educational value and allowed for a lot of interaction. The speakers mentioned repeatedly the “Lindau spirit”, alluding to the community feeling that is created among participants. When you have attended a Lindau meeting, you also automatically become part of the Lindau alumni community, a network that could perhaps be important for future career steps.

Most importantly, as you may have noticed already from what I have said before, the meeting taught me how to approach peers and top level scientists without apprehension! As PhD candidate one is only at the beginning of the research career, but one should not feel uneasy to ask for advice and share ideas with senior scientists. 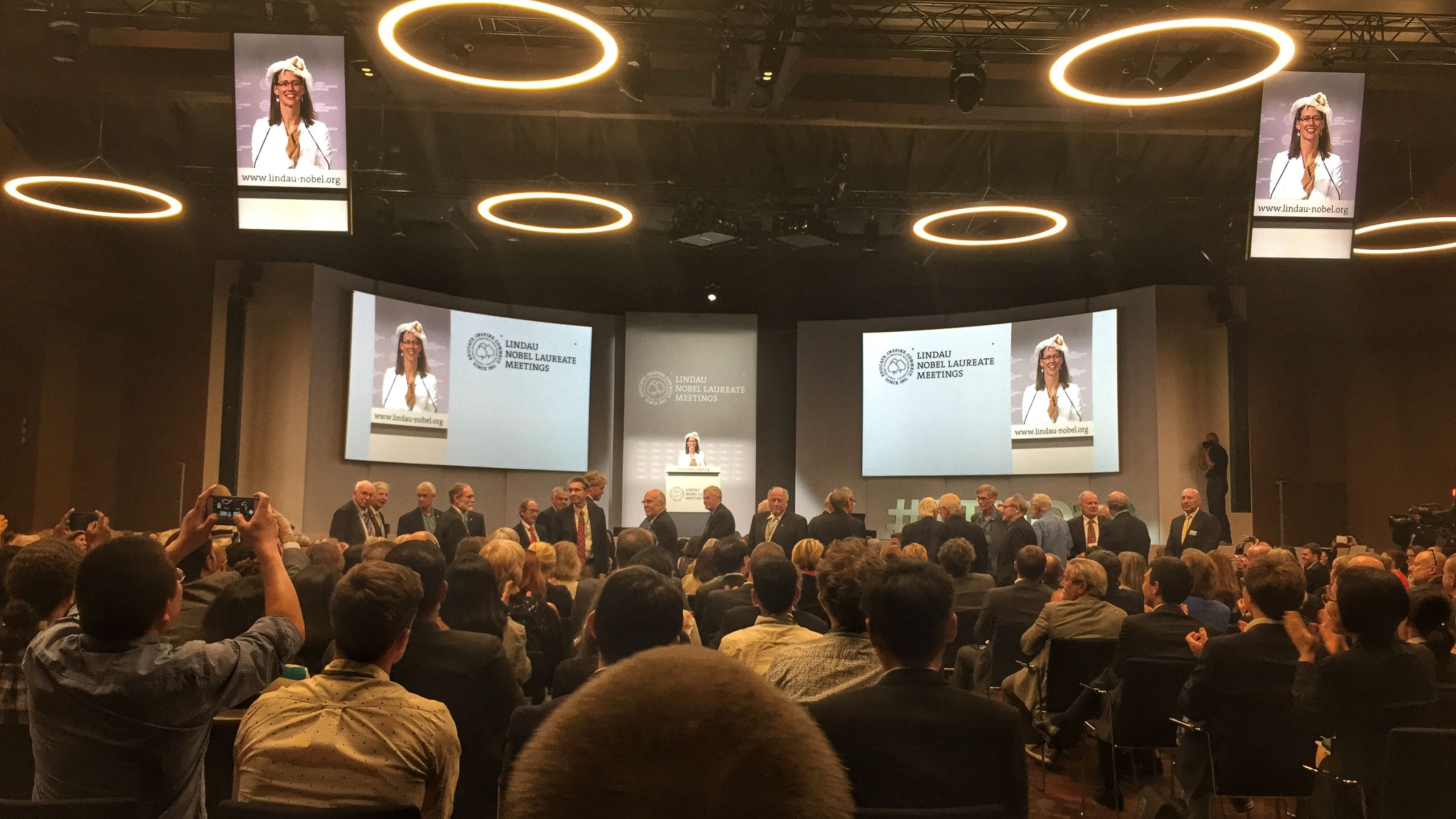 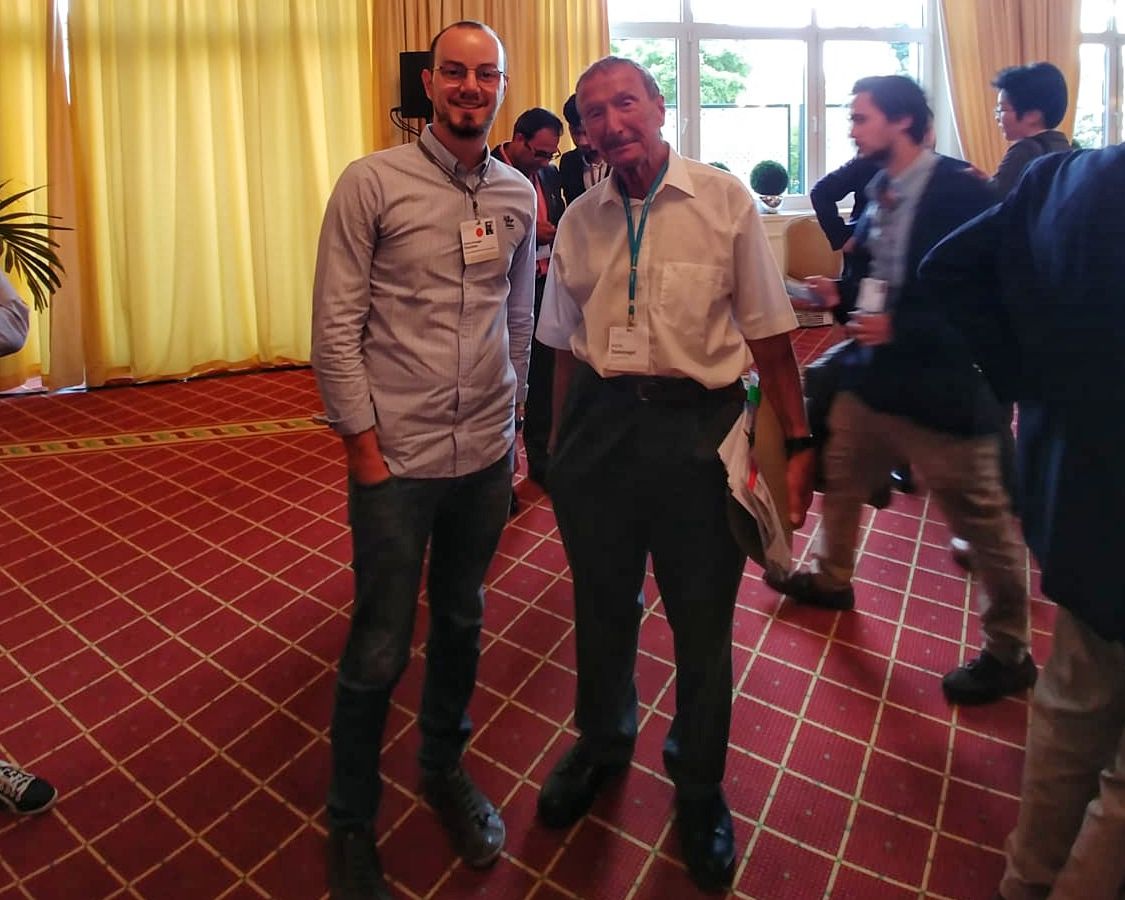 Left: Davide with Prof Louis Ignarro, Nobel Laureate in Physiology or Medicine in 1998 who revealed the biological roles of nitric oxide 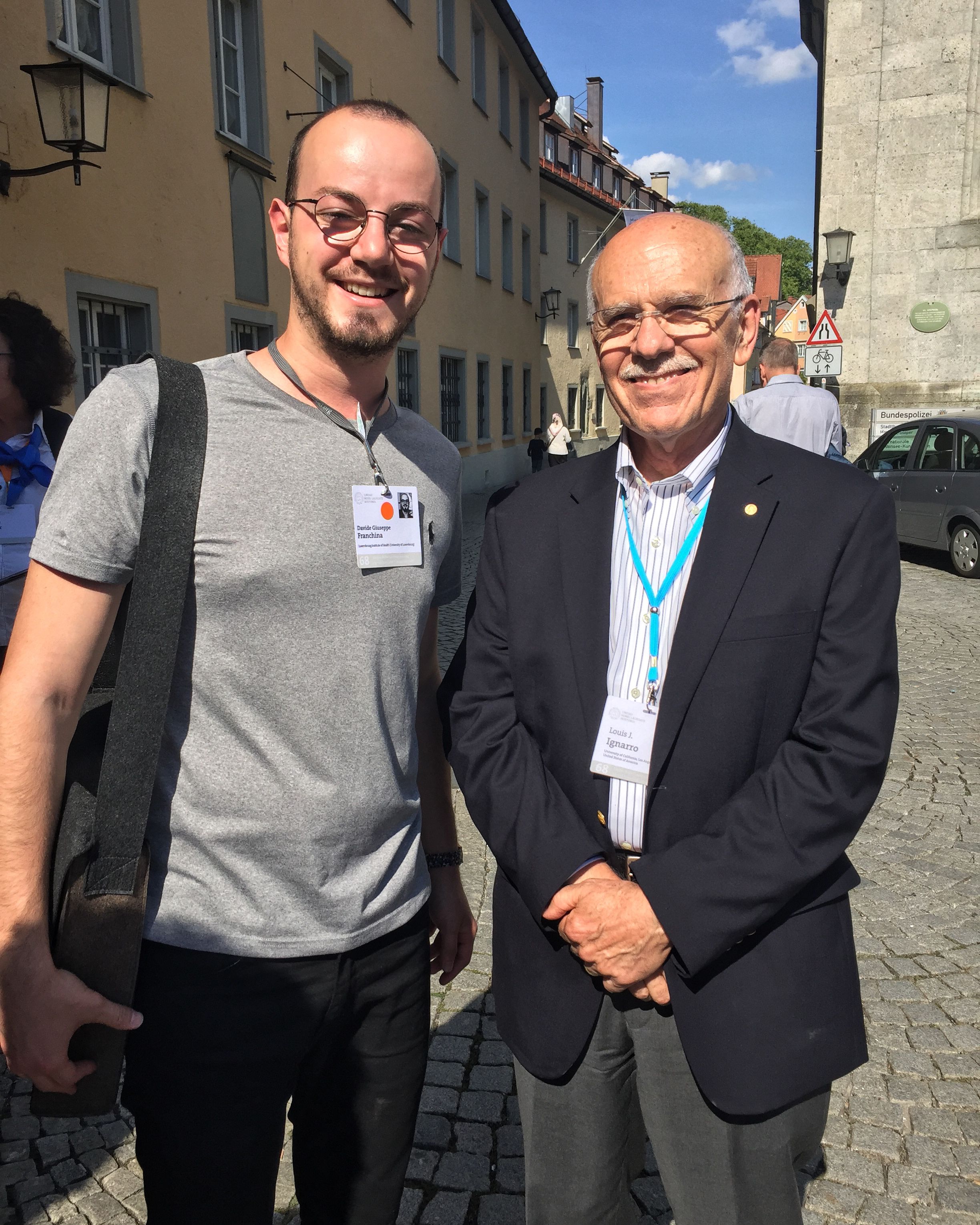